Maple syrup comes from sugar, red, and black maple trees. People have been extracting it for many years. The extract is used in various ways. It can be used to make recipes and products that may be used in households. 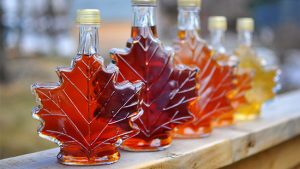 Canada is regarded as the home for most maple syrup producers, as well as exporters. This country has many producers that work hard to extract the syrup from maple trees. These producers have also established an organization that ensures maple syrup is produced and exported to different parts of the world. Most of the syrup that is used in homes and restaurants comes from Canada. These producers have opened many warehouses to store the syrup. So, it means food organizations can depend on Canadian producers mostly those in Quebec or Ontario.

The Products That Come From Maple Syrup

Since maple syrup is sweet and nutritious, most homeowners and restaurants use it to prepare recipes. There are many dishes and snacks that you can prepare using maple syrup, such as the following:

Maple syrup production has been of help to Canadians for many years now. It not only boosts the economy of the country but also ensures that Canadians are healthy. So, you can always use the syrup to make recipes and products such as tart doughnuts as well as taffy.